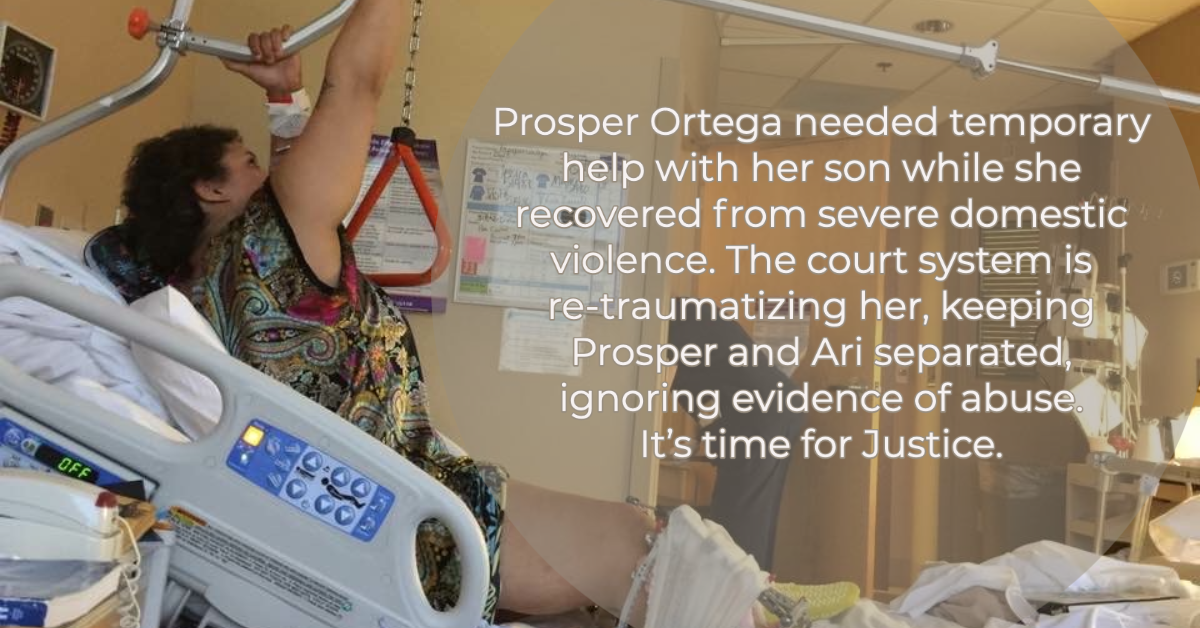 It’s time for Prosper Ortega and her son to be given back their life together. Our mission is to support justice for parents, children and extended family members who put the children first, ensuring their needs are met.

This case highlights the impact of domestic violence, especially where victims are mistreated again and again, often by the system they rely on for protection.

We know that domestic violence leaves horrible scars, and many of us know that playing fair in child custody cases doesn’t happen very often. In Prosper’s case, where domestic violence and custody litigation have merged, the situation is even more precarious as it caused a young mother and her baby to be separated and to suffer even more abuse.

There is much we can do, though, to level the playing field and right the wrongs. Reunification and recovery – full recovery – are the objectives for this family, and we are asking for your help with spreading awareness and lifting them up in your prayers. Being involved in child custody litigation and being separated from your child takes a heavy toll, so every bit of support matters!

To learn more about what we are doing to support the reunification and healing of Prosper and her son, click here. To donate to help cover the upcoming expenses of the trial, including expert fees and transcript costs, click here.

Prosper’s situation – the fact that she is having to fight in the Fulton County Superior Court in Atlanta, Georgia, to bring her little boy home – is more shocking and compelling than the average child custody case. The shock of this story starts with the fact that Prosper was held captive and beaten to within an inch of her life by her former husband. Fortunately, Prosper’s mother realized her daughter was being isolated, that something was terribly wrong; she went to the house where Prosper was being brutalized and rescued her and the baby. Then, the criminal justice system worked as intended. Aaron Uchitel will remain in prison for many years.

Prosper underwent many surgeries between 2016 and 2018; during the time when she was unable to care for her baby in her own home because of the severity of her injuries, with halos on her legs after surgery, she relied on others to care for him. One couple took over her child’s care full time in 2017, and while Prosper was in a wheelchair and medicated, they asked her to sign what was described to her as a “guardianship” agreement to protect the couple and give them standing to do what was needed for the little boy.

Prosper found out much later that this couple used her signature to represent to a judge that Prosper had given up her right as a parent to raise her child, misrepresenting the agreement – when Prosper was absent, meaning not included in the court hearing and not copied on communications with Aaron Uchitel’s father who was also involved. This couple told the court that the injured mother, Prosper Ortega, wanted them to have sole legal and physical custody of her son. You might imagine Prosper’s shock when she was told by the couple months later that they were not returning her little boy to her and that she had no standing or no claim to him. Since Prosper was not included in the hearing when the judge was presented with a document to change legal custody of the child, she had no way of knowing that what the couple was doing was designed to take away her custodial rights to raise her own child. It was impossible for her to defend herself.

In Prosper’s story, her child is being deprived of his real mommy, except for a few hours here and there, hours that for many months cost her several hundred dollars each time she sees him. The couple would only allow her to see her son if she paid supervisors, which cost over $10,000 to manage. The good news? The supervisors documented abuse of the child that occurred in the couple’s home (still no protection for the child, which is a question for the appointed guardian ad litem who has now billed over $60,000.00), and the supervisors proved in their reports that supervision of the mother and child is not necessary. That heavy burden is now lifted.

This expense of having to pay for visitation with her son is one of the reasons we joined her family in fundraising last year. The amount of money she has been forced to borrow and spend is obscene, making it a story from which everyone should learn.

Prosper and her son should not be deprived of time together for lack of the ability to pay several hundred dollars to supervisors, should they? Adding the cost of supervision was one of the abusive litigation tactics used to discourage Prosper. As if that burden is not enough, her opponents moved to discourage fundraising designed to help cover this expense. While the Go Fund Me link is still publicly visible, we are not promoting or asking for donations there because we are not allowed to give money raised publicly after February 11, 2021, to Prosper for her to use in defense of her right to raise her own child. That is an obscene problem, one that sends an absurd message to any parent being financially abused in litigation as Prosper has been that “you cannot ask for help because any help offered will be useless to you.” If the public wants to help you recover your child and makes a donation to you, you have to turn over the money to the people hurting you and your child. Update: the demand for supervision of Prosper’s parenting time was dropped, and they are starting to make up for lost time while awaiting the final trial in July of 2021.

Why is reporting necessary on this issue and on this case?

Money was donated and used to help cover expenses such as the appeal and supervision costs, money needed to help Prosper survive this process. Unfortunately, the opponents, through their lawyer, demanded that public fundraising efforts benefit them instead of Prosper, meaning that if the general public donates to a public fundraiser going forward, only they and their lawyers should benefit. Yes, that is a travesty – a terrible injustice. So, while you cannot currently help Prosper through public donations (unless you want to benefit the people withholding her child), you can help with prayer and through showing up for her at court hearings to provide moral support. If you would like to be kept abreast of court hearing dates and times and where to go to observe, use the contact form here.

Prosper and her family do need our collective support to to keep fighting for the right to protect and to raise her little boy. We believe that with awareness and other forms of support, justice will become reality in bringing them back together as a family. It is not an easy task, and it is a very expensive undertaking, but based on the proposed order submitted by the opponent’s lawyer for the Court to sign, the public is being blocked from helping Prosper survive this financially. If and when that changes, we will update our supporters online and offline.

Once they are together and all the interference is gone, including the abusive litigation tactics that have been used in Fulton County for the last three years, they can begin their healing journey. Once the litigation is over, we can renew fundraising efforts to assist in the recovery from the trauma of separation and litigation and the pervasive, ongoing domestic abuse.

As this story unfolds for viewers around the globe, we’ll see the proof of the injustice and also what needs to happen to restore justice. Thank you for being here and for showing up for Prosper and Ari and for Navigating Justice.

The beginning of the story and a brief overview are shown here on this YouTube video. Check it out and let us know what you think.

If you have questions or trouble with any of the links, please contact us here.

You can support the work we do at Navigating Justice on cases like this one through a tax-deductible donation using this link or by holding your smart phone over the QR code below. This will take you directly to the PayPal donation page created through our alliance with Accessibility Bridge to allow us to build awareness and support for disabled parents, especially for those who are victims of domestic violence.

We are heading towards the June trial in Prosper’s case, only now with a ruling from the Court of Appeals of Georgia in Prosper’s favor. When the trial court ruled over a year ago that the legal standard the judge applied to the custody petition meant that the burden was on Prosper to prove that the couple who has her child should not keep him, her lawyer filed an interlocutory appeal, which the court certified. The Court of Appeals granted the petition for review and briefs were filed. Almost a year has passed, but Prosper was rewarded with a win on the appeal of the legal standard used. The Court of Appeals showed that Prosper’s parental rights are intact and that the burden is not on her, but rather on her opponents. The temporary orders of the trial court are reversed in part and the case remanded with instruction to the court. We will update once we have new developments. The appellate opinion can be downloaded from the Court of Appeals website or viewed here or by scrolling through the embedded document below.